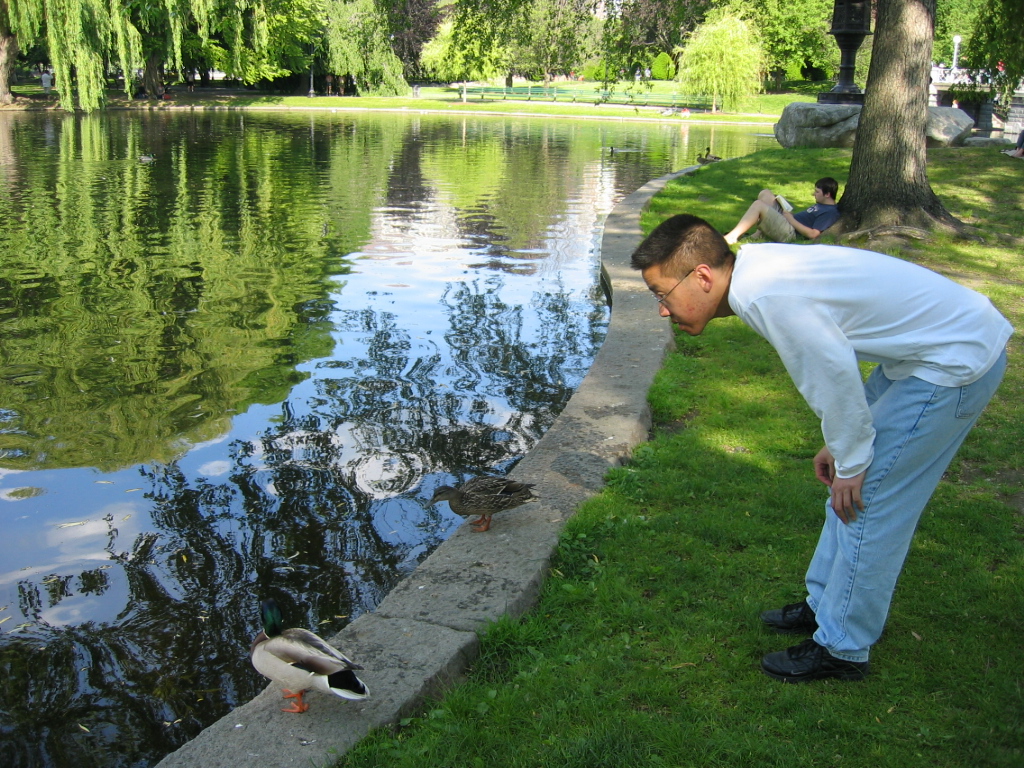 Ed, my beloved Ed. My big brother and I have shared so much over the years. Ed and I, unlike many siblings I know, were very close and communicated often despite our seven-year age difference and the 3,000-mile distance that we’ve had since I left for the East Coast in 2004. Of course, when we were little, we often fought as most siblings do. I remember the time when I was about 6 and Ed was 13, and we were playing in the backyard with our Super Soakers on a hot day. I sprayed Ed pretty badly, and for a second I thought I was the victorious one. Little did I know that when Ed came back from around the corner, he had an entire bucket of water that he would then dump all over me. Yeah, I was dripping wet. So, I lost in the end. He was a sneaky one, that Ed. As an older brother, he felt compelled to teach me important life lessons – like how to play catch, dribble a basketball between my legs (which I failed at miserably), and the importance of Transformers, G.I. Joe, and Legos. Much to his absolute shock, one by one I accidentally broke his Transformers, and maybe at that point he realized that maybe it wasn’t always the smartest thing to be good to your little sister.

As the years went on and we became more mature, we shared more and became closer. Ed found the truth in God, and in the early 2000s, when he was baptized as a Christian at the Golden Gate Christian Church, he emerged feeling more peace and calm than he ever had in his life. He was so eager to share the word of God with others and hoped that they would find salvation. One day, he came home with Rick Warren’s book The Purpose-Driven Life. He gave me a copy and encouraged me to read just one chapter a day. “I want you to lead a life with meaning,” he said to me. I got through almost all of it, and I could see the excitement in his eyes when he’d see me sitting on the couch reading it. It never took much to make Ed happy. It was the little things in life that brought glimmer to his eyes. Another day, I realized exactly how determined he was to share with others – I saw him open his filing cabinet to reveal at least a dozen other copies of The Purpose-Driven Life! He even gave a copy to our family dentist! That was the kind of person Ed was – determined to help others and generous beyond comprehension at times.

His generosity knew no bounds despite his limited income. He was the first man in my life to ever have flowers and balloons delivered to me. It was in 2004 for my high school graduation. He was so proud of me and wanted me to know it in every possible way. He also got me my first digital camera as a grad gift, which was such a big deal at the time. I felt so badly that he spent so much money on me, and he insisted that he wanted to do it. “You worked so hard to get here, and you’re going to a great college on the East Coast,” he said. “You’re so brave to leave home so far away for school. I could never do that.” Ed was always so self-deprecating. He always doubted himself and how capable he was, and all I wanted was for him to realize his own inner strength. I would always tell him this, and he’d shoo me away.

That same year in 2004, he even took me to Seattle shortly after my high school graduation so we could see his favorite singer in concert, Shania Twain. Originally, our mom, being the overprotective Asian mother she is, didn’t allow us to go. She said we were too young to travel on our own. So we ended up nagging our cousin Dan endlessly until he finally agreed to accompany us and be our “chaperone” of sorts. It was our first trip out of the state together without our parents, and the first and only trip where all I saw were smiles on Ed’s face. He not only got to see Shania in concert, but he even got to hold her hand and get his ticket autographed by her while sitting in his front row seat. Ed was on cloud 9. It was like he was floating. I’d never seen him happier.

Ed’s focus and passion were never more obvious than when he spent a number of years in the mid 2000’s studying Kenpo karate. He had always wanted to do it as a child, but just never had the chance, so as an adult, he wanted to make his desire a reality. My brother was a true man of his word. When he said he would do something, he would always, always do it. A few times a week, he’d head to the Sunset and practice karate. Once, I accompanied him to his class to watch him. With the camera he gave me, I took photos and videos of him. It was then that I realized exactly how deep his passion was. The concentration he had and the zeal he possessed just overflowed in every single movement he made. He made it all the way to brown belt, just one belt below the highest level, black belt, and I was so proud of him. Despite his own self-doubt, he was capable of so, so much. He just didn’t realize it.

During his time at Macy’s working in the domestics department, he wanted to improve our home life by completely redoing all of our bedding and bath items. He insisted that we have soft hotel collection-quality, high absorbency towels, taught me what thread count was and how it affected bed sheet quality (and scolded me when I didn’t think it was a big deal), and bought brand-name dishes and mugs for the kitchen. He even got us real Tupperware-brand Tupperware. Who has real Tupperware?! Do you know anyone who owns real Tupperware-brand Tupperware? He wanted us to have a beautiful home and did everything he could to make it inviting and tasteful. And when Christmas rolled around, everyone in the family could expect to get at minimum a 400-thread count bedding set from our beloved Ed. The question was never, “What might Ed get me?” The real question was – “What color bedding would I receive?” He sure was practical.

And since I left home nine years ago, every time I’d come back from New York or Boston, he was always so excited to see me when I’d walk through our front door. His joy was written all over his face. He’d jump out of his seat and run up to give me a big hug to welcome me back home. Sometimes, he’d even have a “Welcome Home, Yvonne” cake waiting for me. I don’t think I ever did anything to deserve it, but being Ed, he always insisted that my coming home was well worth celebrating.

Ed had a lot of quirks that made him incredibly loveable. But of all the things about him that I will remember and cherish most, in my mind, he will always be the truest personification of genuineness, innocence, and purity. He believed in the best of people even when they disappointed or judged him, and he hated to think that anyone could be capable of doing any wrong. Though he struggled with his own inner demons, he always remembered and deeply loved those around him, and as one friend of his wrote to my family in a letter in the last week, no matter how he felt, he always wanted to ask how you were and ask you questions to show that he truly cared and was concerned about you.

So Ed, although you are no longer with us now, I have some words I’d like to say to you today in front of all of your family and friends:

No words I could ever say could express how much I truly love you and yearn for you to be here with our family and me now. Mommy, Daddy, and I love you and miss you so much that it hurts to a point that it is indescribable with words. All I want is to see your beautiful face again, that warm smile with those full lips, those incredibly white teeth. All I desire is to hear that warm, radiating laugh come from your mouth, and to feel your strong, warm arms around me. I know that you had many struggles, and though that struggle has ended, I really hope with my entire being that you have found peace and comfort where you are now. But please know that for the rest of my life, every single day, I will remember you, think of you lovingly, and never forget the profound impact you had and will continue to have on my life. One day, when I am walking down that wedding aisle, I will feel your gaze on me lovingly. One day, when I give birth to your future niece and nephew, I know you will be looking down on me with a big smile on your face. I will see your beautiful face and smile back.

I know you always used to say you felt badly because you wanted to be a better role model for me, but in truth, you were the best older brother I could have ever asked for. Some people live an entire lifetime and never learn to exude love and genuineness in the way you did. I thank you for teaching me realness and true love, and I will wait for that one day in the future, when I will walk through that open door, and be greeted by you welcoming me home again.

2 thoughts on “Tribute to my Beloved Ed”

This site uses Akismet to reduce spam. Learn how your comment data is processed.